Recruiters might hold thousands of interviews in their careers and a lot of them are reporting the same thing—that most candidates play it safe with the questions they ask, or have no questions to ask in a job interview at all.

For job applicants, this approach is crazy! This is a job that you’re going to dedicate a lot of hours to and that might have a huge impact on your future career. Don’t throw away the chance to figure out if the position is perfect for you.

Here are 7 killer questions to ask in a job interview that will both impress your counterpart and give you some really useful insights into whether this job will be a dream … or a nightmare.

1. What are some challenges I might come up against this role?

A lesser candidate might ask, “what does a typical day look like in this role?” While this is a perfectly reasonable question to ask in an interview, focusing on potential challenges takes you much further because it indicates that you already are visualizing yourself in the role.

It’s impressive because it shows that you are not afraid of challenges, and you are prepared to strategize a game plan upfront to make sure you succeed if you get the job.

It can also open up a conversation about how you’ve solved problems in the past which can be a reassuring exercise for both you and the hiring manager.

Asking about potential roadblocks means you hear the other side of the story—dysfunctional teams, internal politics, difficult clients, bootstrap budgets and so on. This can help you decide if you’re up for the challenge or whether, for the sake of your sanity, you should respectfully decline the job offer.

2. What are the qualities of really successful people in this role?

Asking this question shows that you care about success, too. How could they not hire you with a dragon-slayer attitude like that?

Interviewers hire people who are great people to work with, but the definition of “great people” differs from person to person.

Does this company hire and promote people with a specific attitude, approach, worth ethic or communication style? Are the most successful people in this role strong extroverts who love to talk and socialize when you are studious and reserved? Does the company reward those who work insane hours when you’re happiest in a more relaxed environment?

If so, then this may not be the right match for you.

Whatever the answer is, you can decide whether you have what it takes for the manager to be happy with your performance in this role. And if the interviewer has no idea what success looks like for this position, this is a sign to proceed with extreme caution.

3. From the research I did on your company, I noticed the culture really supports XYZ. Can you tell me more about that element of the culture and how it impacts this job role?

Of course, you could just ask “what is the culture like here? ” but then you would miss a great opportunity to show that you’ve done your research!

Interviewers give BIG bonus point to those who read up and pay attention, and you’ve just pointed out that (a) you’re diligent in your research (b) you care about the company culture and (c) you’re committed to finding a great cultural fit.

This question is so useful because it lets you pick an element of the culture that you really care about and that will have the most impact on whether you are happy with the organization.

For example, if training and development is important to you, then you need to know what’s on offer so you don’t end up in a dead-end job with no learning opportunities.

Companies often talk a good talk, and their press releases may be full of shiny CSR initiatives and all the headline-grabbing diversity programs they’re putting in place. This is your opportunity to look under the hood and see if the company lives its values on the ground.

A company that says it is committed to doing the right thing by customers should not judge success by the number of up-sells an employee makes, for instance. Look for consistency, so you aren’t in for a culture shock after you start.

4. What is the promotion path for this role, and how would my performance on that path be measured?

To be clear, you are not asking when you will get promoted. Don’t go there—it’s presumptuous, and it indicates that you think you are better than the role you have applied for.

A career-minded candidate, on the other hand, usually has a plan that she’s working towards. This question shows you have a great drive toward growth and advancement and an intention to stick with the company beyond your current state.

All organizations have levels of work and authority—executives, upper managers, line managers, the workforce, and so on. Understanding the hierarchical structure gives you power, because you can decide if you can work within it and are capable of climbing through its ranks, or whether it will be endlessly frustrating to you.

In a traditional pyramid hierarchy, for example, the people at the bottom tend to have very little autonomy to make decisions. This gets better as you rise up through the pyramid, but even middle managers have little power to create policy; they are more concerned with enforcing the rules the top leaders make.

If having a high degree of autonomy and accountability is important to you, you may do better in a flat hierarchy where work teams can design their own way of achieving the corporate goals.

5. What’s the most important thing the successful candidate could accomplish in their first 3 months/6 months/year?

Of all the questions to ask in a job interview, this one is impressive because it shows that you identify with and want to be a successful performer, and not just an average one.

Here, you’re drilling down into what the company needs, and needs quite urgently, proving that you’re all about adding value to the organization and not just about what’s in it for you.

Most job descriptions come with 8, 10 or 12 different job responsibilities and a lot of them with be boilerplate or responsibilities that someone in HR thinks are associated with this role. This question gives you a better sense of which responsibilities are the most important—and they may not be what initially attracted you to the role.

If you like the idea of training juniors, for example, but success is judged purely on your sales figures, then is this really the job you thought you were applying for?

This question will also give you an idea of what kind of learning curve you’re expected to have and whether you’ll get any ramp-up time before getting down to business. If you’re the type of person who likes to jump right in and get things done, for instance, you may not be thrilled to hear that you’re going to spend the first three months shadowing a peer.

This simple question is all about building rapport with the interviewer. People like to talk about themselves, and the interviewer will be flattered that you’re interested in her opinions.

Hopefully, you’ll find some great connection points that the two of you share. What similar things drive you head into the office each day? How will you fit into the culture?

You can learn a lot from this question. Someone who genuinely enjoys his job will be able to list several things they like, and their answers will sound passionate and sincere. If not….well, you might consider that a red flag.

Since you potentially can learn a lot about the company culture from this question, it’s a good idea to figure out upfront what’s important to you. Maybe you’re looking for a hands-off boss who values independent thought and creativity? Maybe you work better in environments that move at a rapid, exciting pace?

Whatever’s important to you, listen carefully and see if you can find any common ground.

7. Based on this interview, do you have any questions or concerns about my qualifications for the role?

What a great closing question to ask in a job interview! It shows that you’re not afraid of feedback—in fact, you are inviting it. Not being able to take criticism is a red flag for employers, who need to know that you’ll act on any “coaching moments” with a good heart.

As a bonus, asking this question shows that you are really interested in the position and wish to clear up anything that may be holding the company back from hiring you.

What a devious beast this question is! On the surface, it looks straightforward, but it’s actually giving you four key pieces of information.

First, is the manager capable of giving you feedback when put on the spot like this? Some managers are scared of giving feedback, or don’t think it’s important enough to bother outside of a formal performance appraisal. Do you want to work for a boss like that? How will you improve if no one is telling you what you did wrong?

Second, can the manager give feedback in a constructive way without being too pillowy or too confrontational? It’s unfair to expect the interviewer to have figured out your preferred way of receiving feedback in the space of an interview, but if she come back with a machine-gun fire of shortcomings or one of those corporate feedback “sandwiches” (the doozy slipped between two slices of compliment), then you need to ask yourself, can you work with someone who gives feedback like that?

Third, you get to learn the things the hiring manager is concerned about before you leave the interview. This gives you the chance to make a final, tailored sales pitch so you can convince the interviewer that she should not be worried about those things.

Fourth, you get to learn the things the hiring manager is concerned about period. If turnover is keeping him up at night, then your frequent job hopping might get a lot of additional scrutiny. If he’s facing some issues with conflict or communication, then he might raise concerns regarding your performance in this area.

Listen carefully: the concerns that are being raised about you might actually be a proxy for problems in the wider organization.

Summary, making Your Interview Work for You

Interviews are a two-way street. While it is important to differentiate yourself from every other candidate, understand that convincing the interviewer you’re the right person for the role goes hand-in-hand with figuring out if the job is the right fit for you.

Would you feel happy in a work environment where the people, priorities, culture and management style were completely at odds with the way you work? Didn’t think so! 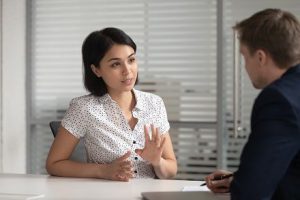